When people heard that I was planning to travel to Beirut, their reaction was the same – they said “You’re going – where??” Hotel, Downtown Beirut Despite March 14th’s outpouring of pro-democracy fervor, despite the images of more than a million Lebanese (in a nation of 4 million) championing freedom, despite the very real similarities … END_OF_DOCUMENT_TOKEN_TO_BE_REPLACED

When people heard that I was planning to travel to Beirut, their reaction was the same – they said “You’re going – where??”

Despite March 14th’s outpouring of pro-democracy fervor, despite the images of more than a million Lebanese (in a nation of 4 million) championing freedom, despite the very real similarities between Beirut, Italy and Paris, “Beirut”,
the word and the city, have become synonymous with urban warfare, snipers and car bombs. In the movies, whenever an American wanders into Beirut, he winds up dumped in the back of a car with hood over his head. This happened in Syriana, a movie I fortunately only saw after I returned from my trip. In a pivotal scene, George Clooney’s CIA agent threatens a James Bakeresque government official with what he calls “Beirut Rules” – “if anything happens to me, my friends will kill your children, your wife, then you..” 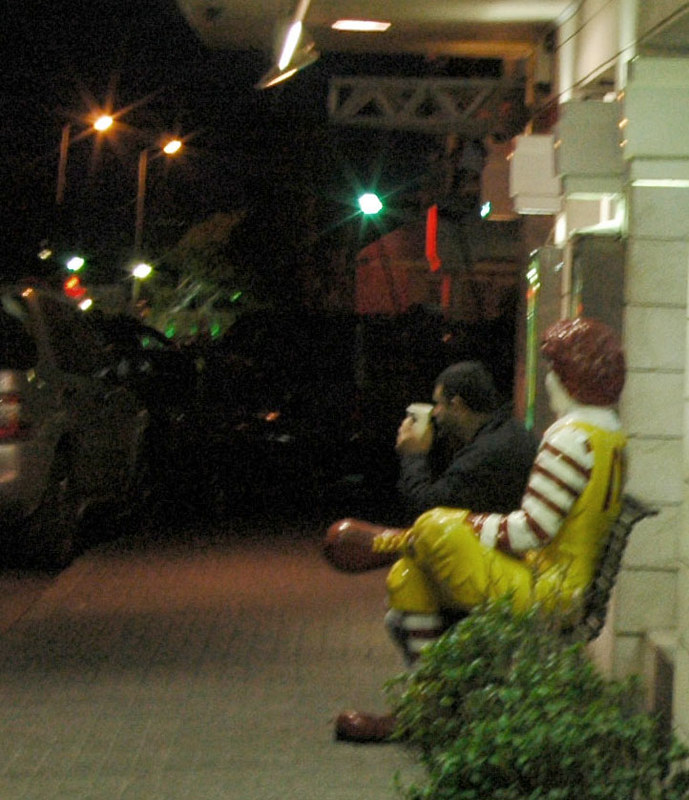 Those are the “Beirut rules” we hear about in the west. 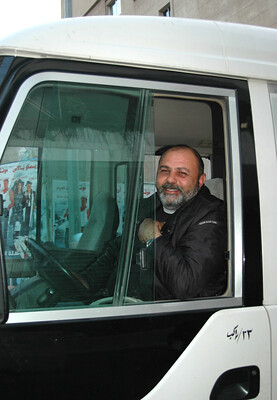 The week before the trip was spent trying to make and rearrange flights to both Beirut and Israel (for the Herzliyya conference), a process that’s difficult at best considering that there are no flights from Beirut to Israel.

The week before the trip I tried tell myself that I was not worried, but I barely ate anything at all. Warren Zevon’s Lawyers, Guns and Money kept running through my head.

Soon after this shooting occurred, I got an email from Michael Totten saying “Things are dicey here, and could get worse.” Since my complete lack of knowledge about Beirut or the Middle East would make me a real liability in an emergency, I responded by offering to call off my trip. But he wrote back, saying the situation wasn’t as bad as it originally seemed.

Still, news reports kept the Beirut/warzone image alive. There were the rumors that Hezbollah was going to storm the Beirut airport. I tried to pack for war zone conditions, choosing camping clothes – things that didn’t show dirt, that you could wash in a ditch. As a result, I was seriously frumpy in fashionable Beirut.

My first day there, as we walked down towards the rally, past scores of soldiers lining the streets, pockmarked buildings (were those bullet holes?) and a kitchen knife that lay, incongruously clean, across the sidewalk in front of a restaurant, Michael did a quick overview of the situation in Beirut, delivered with a kinetic enthusiasm for the city and the people who lived there.

His alternative Beirut rules: Beirut is entrepreneurial, urbane and democratic. They’re not leaning towards fascism – if anything, (especially traffic-wise) the city leans towards anarchy. Sunnis, Christians and Shia all hang out at the same bars. Nobody, including Hezbollah, wants to impose sharia laws on this place. No one would stand for that. And no one wants civil war. 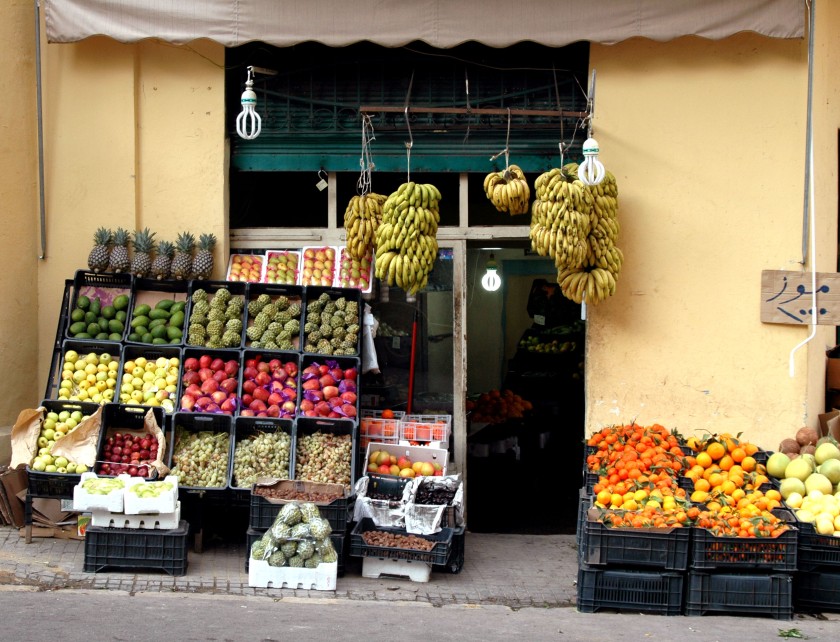 Street crime wasn’t a problem in Beirut- basically, the real robbers work for the phone company and the government. In that sort of corrupt economy, petty crime isn’t tolerated. Beirut was starting to sound more like Hoboken, a Hoboken with tanks in the street and barbarians at the gate.

I had hoped to visit Southern Lebanon, but Michael’s contacts, the people who work for the Lebanese Committee for UNSCR 1559, decided that this wouldn’t be prudent. I’d also hoped to drive to Mount Lebanon but my poor planning, limited daylight hours and rumors floating of another Hezbollah-led airport takeover made that unworkable.

So, I spent most of my time doing what I usually do in a new city, walking everywhere, taking pictures. 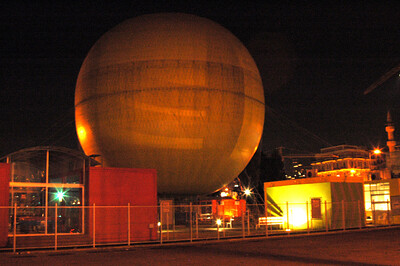 Given how easy it is to travel by taxi in Beirut, a random walking tour turned out to be the best option. When my feet got tired, I could grab a cheap ($1.50) “service” taxi. But, before I could do that, I had to learn the name of the closest landmark to the hotel, a place the mostly arabic-speaking drivers could easily find. The closest landmark was the Saint George Medical center. In Arabic, the Hospital was called ‘Moostache Fa-Room”. The incongruity of a hospital whose name sounded like a comic-book bad guy made the phrase easy to remember.

While taking pictures of a mosque in West Beirut I bumped into another woman who was taking the same picture, who was also dressed for a camping and/or a warzone. I guessed that she was a fellow American and said hello.

She was an American, a film producer who had grown up in Lebanon during the civil war. She was amazed by the improvements they’d made, the new buildings, the reconstruction and repairs. As we walked in search of the American University of Beirut and the nearby crepe shops, she talked about growing up here, a childhood that sounded surprisingly normal. She wasn’t sure about how she felt, coming back, but the weather was certainly an improvement over Washington, DC.

Another day, in a Sunni neighborhood that seemed to be more conservative than most (most of the women were veiled, signs were in Arabic, not English), I stopped by a bakery and ordered using my excruciatingly bad Arabic (plus hand signals) figuring that they wouldn’t speak English. I was wrong – their English was about as good as mine and their chocolate croissants and petit fours were genuinely French.

The reconstructed Downtown shopping district was ringed with razor wire, patrolled by soldiers and police. At the height of the holiday season, the stores are open, but they’re empty as a result of Hezbollah’s encampment downtown. Just one more way that Hezbollah’s Putsch is ruining Beirut’s economy.

Although I was warned away from the areas controlled by Hezbollah, I did decide to wander into their downtown encampment. Unfortunately I decided to do this at night. The area under the overpass was filled with garbage and roaming dogs.The propaganda stands were neglected, Kalashnikov  flags and hammer and sickle were both grey in the moonlight. A little kid, about 5 years old, was wandering alone, stumbling, apparently high or drunk. Older men sitting near the edges of curbs, a few groups of teenagers watched him and me with an expression that couldn’t be called sympathetic.

The atmosphere wasn’t like a Phish concert at night, it was more like the South Bronx, 1984. The shivers running down my spine told me to put my camera away, to refrain from wandering up to the tents to ask questions. I walked towards the street and stood in front of a bakery, looking for a taxi.

Another Beirut rule that applies to urban areas worldwide: When you’re not looking for a taxi, they’re always in your face – when you actually want one, they’re never around.

The baker was closing up shop, bringing in a cart of bread loaves. For some reason, he handed me a loaf of bread, and he refused to let me pay for it.

That sort of kindness was the “Beirut rule” that I saw in most of the neighborhoods I wandered through.

A taxi appeared. With a quick incantation of “Moostache Fa-Room”, I was on my way home.

* Charles Malik describes his walk through the camps at night.