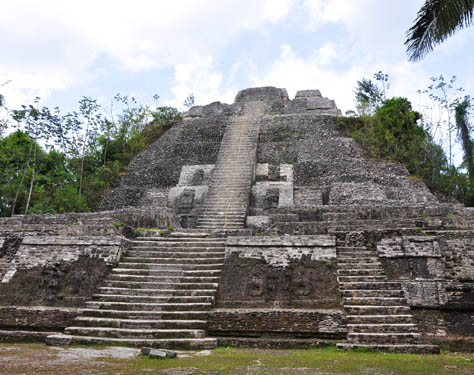 We visited Lamanai, the ruins of a place that was once an urban center of the Maya civilization. During the height of their civilization, (800-900 BC) there were more than a million Mayans living in Belize. Now, the population of Belize is about 300,000.

Bruce and me at the top of the Temple: When I had almost climbed to the top of this temple, I took my hat off because it was slipping and blocking my view. I set it between some rocks so it wouldn’t blow away.

On my way down, when I was almost at ground level, my husband reminded me about the hat. Since the Belize government is somewhat neurotic about the pristine quality of their tourist attractions, I was worried that the guide would get in trouble if I ‘littered’, so I climbed back up and got the hat. Unfortunately, just as we were about to get back on the boat, my hat blew off, into the river. I wasn’t about to try to get it, since I’d seen this croc…

…swimming in the same area of the river. I guess the Mayan Gods wanted that hat. 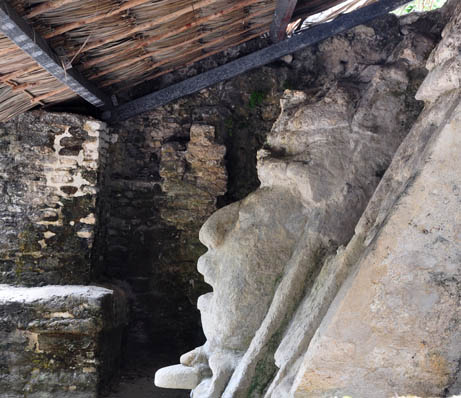 Traditional Olmec “giant head” sculpture: The Olmec merged their traditions with other Mayan tribes. According to our guide, there are some theories that the Olmec tribe originated in Africa. Some of these theories are based on certain qualities of the Olmec language.

Lamanai, which means “submerged crocodile” was actually pronounced Lam’an’ain by the Olmec/Mayan. “Ain” is also a letter in Arabic (which kind of looks like a backwards 3), and it also means ‘eye’. Which may prove something. Or nothing…

This is the site of where Mayans would play a ballgame that was sort of like raquetball or vollyball, and which often featured human sacrifice. The winners would have the honor of being killed. It seems to have been a Mayan tradition to sacrifice their best and their brightest to the Gods, as volunteering to be killed guaranteed a ticket to heaven. This may have reinforced faith and unity within their society, but in the long-term, this tradition would probably weaken any civilization.

As we left the city, our guide noted that many of the Mayan ruins in Belize are still buried within the jungle. There have been few archeological studies of the Mayan past. We still don’t know what their daily life was like, or why each village collected mercury in a jar. Like the technology of Roman civilization, we have no idea of what we lost – this once thriving, innovative civilization is still a mystery. 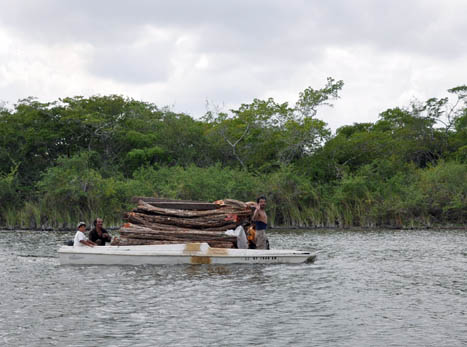 The river is kind of the area’s main street. It’s a lot less bumpy than the roads. 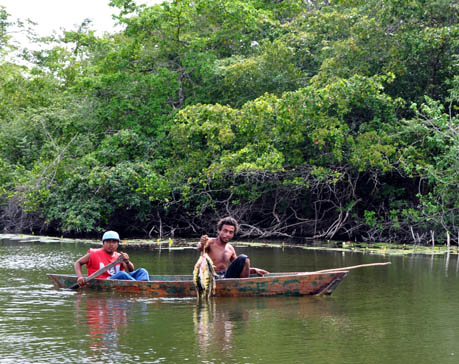 Mennonite Village: According to our guide, these are ‘progressive’ Mennonites, who take a day off on Sunday to smoke and drink, then go back to being Mennonites on Monday.