Unlike most of the notable speakers at this conference, I’m not a media expert, government representative or a journalist. I’m just a web designer and blogger who happened to be in the right place at the right time. I was in Beirut last week, and I was planning to visit friends at this conference. I asked Richard Landes if I could sit in on the talks, and he asked me if I’d like to show my photographs and say a few words. So here I am…

Just a few words about my blog. I’ve been blogging about politics for a few years. After 9/11, like many people, I wanted to learn more and share more information about the motives and tactics used by terrorists. As Sun Tsu says, “Know your enemy.”

Our motives are harder to understand. We spend years debating the ideology of terrorists, we debate whether we should call them terrorists, we argue about their religion, we ask “Why do they hate us?”

To me, the Western World’s attitudes towards terrorist groups and their ideologies is summed up pretty well by this “Pearls Before Swine” cartoon.

An intelligent yet strategically challenged zebra writes a note to the lions asking “Why do you attack us? We invite you to examine your own motives…we look forwards to receiving your thoughts”

The lions write back. They say “YOU TASTE GUD.”

They hate us because they’re hungry. They want more of everything and we’re in their way.

A few weeks ago Michael Totten sent out a call to some of the bloggers attending this conference asking if they’d like to join him in Beirut. I thought a visit during Hezbollah’s occupation of the city sounded interesting, so I said I’d go.

I’ve always wanted to see Lebanon, but I have to admit that I hoped to go to out of a sort of curiosity about terrorist groups. I’ve been writing about terrorism and terrorist groups for years, but I’ve never come into direct contact with them. Here was an opportunity to see one of the more powerful ‘militant’ groups in their habitat.

I was expecting Hezbollah’s rally to be a gathering of black-robed radicals screaming “Death to America!”, “Death to Israel!”, shaking their fists in rage. Instead, I found women, some veiled, some not, families kids and balloons. If you ignored the inflammatory content of the speeches (which I could because they were delivered in Arabic), the whole rally was similar to the Million Mom March.

I walked among the crowd with my camera, my entire appearance just screaming ‘foreign journalist’, but no one seemed to mind my presence. In fact, the fellows with earphones and walkie talkies made a special effort to be sure I got photographs of the sizable crowd. There were many of these ‘handlers’ and they managed the crowd very efficiently. If we want to know the enemy, we have to note their ability to herd a crowd and manage the media.

Lots of kids asked me to take their pictures 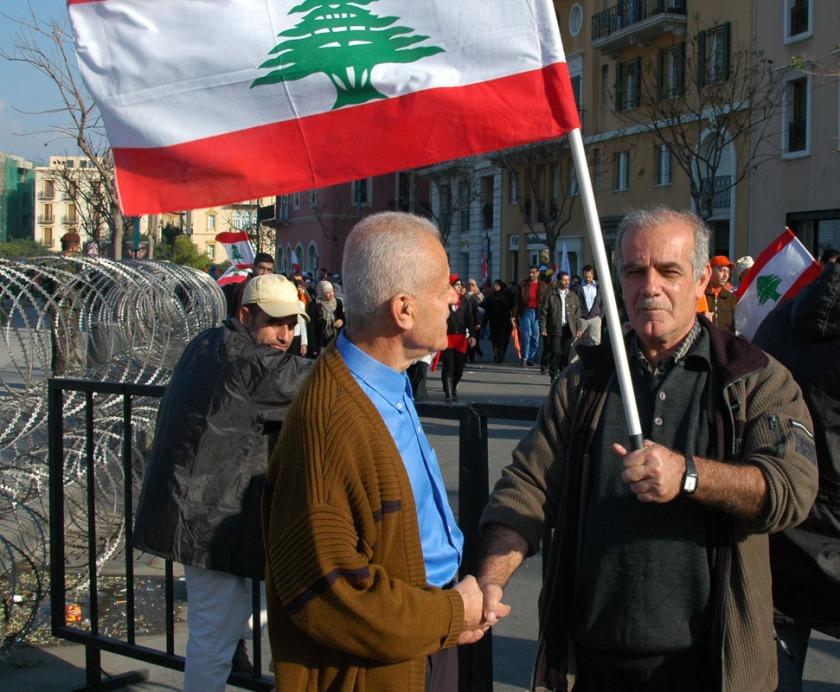 These men asked me, in French, to take their picture

The sunny atmosphere of Sunday’s march was a great contrast to the ambiance of the semi-permanent tent city downtown. Later that week, when I visited the outer edges of the tent city, the atmosphere was less Million Mom march, more like the South Bronx, 1985. These women, like many of the people at the rally, are the day trippers, bussed in from rural areas in Lebanon.

The people with orange flags are Aounists, Christians who ally with Hezbollah for political gain. They don’t share Hezbollah’s ideology, and they have a history of being vehemently anti-Syria.

In Lebanon, people will join with groups like Hezbollah purely for political gain. These Aounists are not motivated by promises of Sharia Law, a worldwide Calphate or 72 virgins. 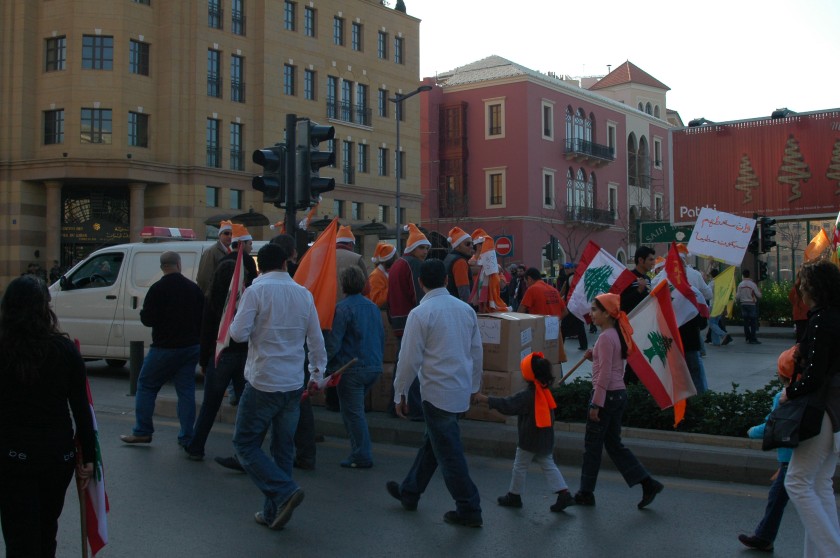 Aounists are Christians who are allying with Hezbollah because they believe that they’re allying with the ‘Strong Horse’ in Lebanon. Proof of their Christian ties – the Santa hats.

As I was walking home from the rally, a man tapped on my shoulder and and asked me to take his picture. He held up a picture of Gebran Tueni, an anti-Syrian Lebanese journalist who was killed by a car bomb. The Syrians and their Lebanese allies were suspects in the bombing.

The man, whose English wasn’t very good, pointed to the Aounists in Orange and said “Bad. Then he pointed to Tueni and said “Good”

Know your enemy, know yourself. If we portray our enemy in this war as ideologically motivated, if we seek to understand them by understanding Islam, we’ll be wasting our time. Groups like Hezbollah hide behind the skirts of religion, but their motive is political gain. Aounists, who disagree with Hezbollah on nearly every issue, are willing to march with them to reach the same goal. These groups know how to manipulate the media and they know how to manipulate millions of followers in their attempt to get what they want. They’re not fooling the man on the street, but they are fooling the media and the world’s politicians. They portray themselves as ideologically motivated seekers of democracy. It’s our job to expose that deception.